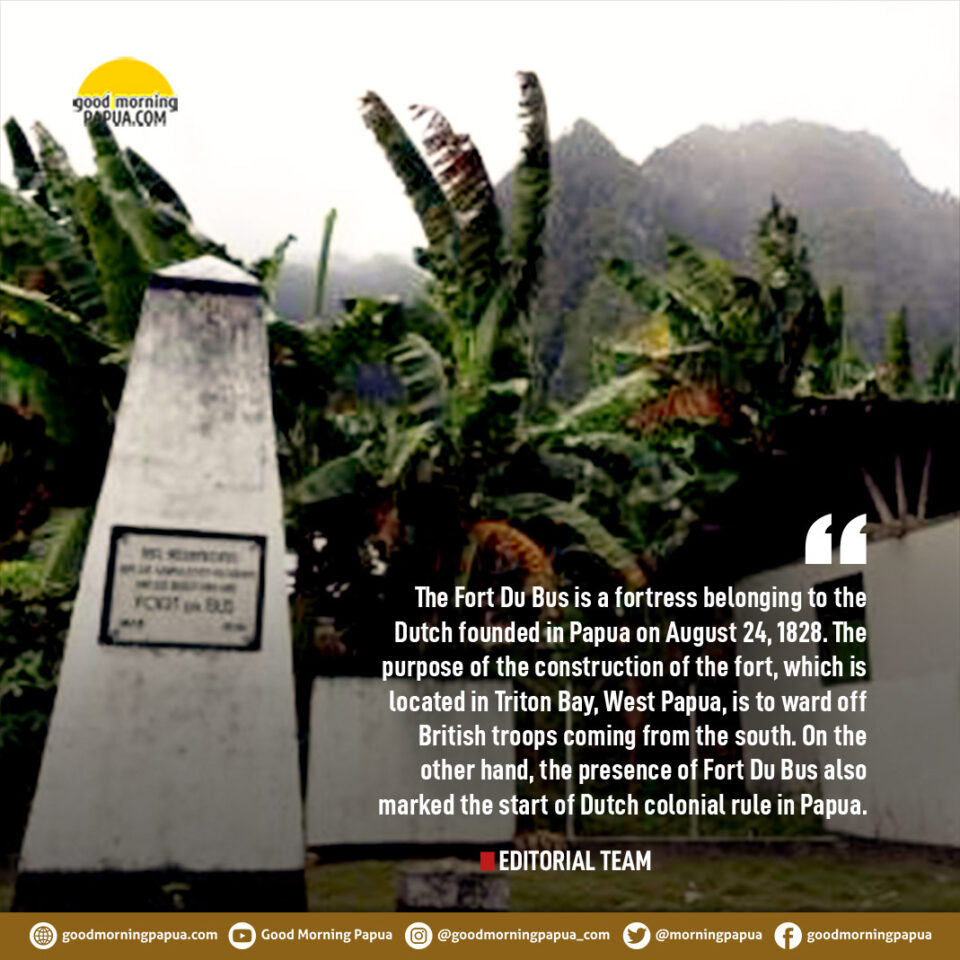 goodmorningpapua.com – The Fort Du Bus is a fortress belonging to the Dutch founded in Papua on August 24, 1828. The purpose of the construction of the fort, which is located in Triton Bay, West Papua, is to ward off British troops coming from the south. On the other hand, the presence of Fort Du Bus also marked the start of Dutch colonial rule in Papua.

At the beginning of the 19th century, the territory of Papua was ruled by the Dutch from the Moluccas. When the British showed interest in occupying this area, the then Governor of Maluku, Pieter Merkus, began to worry. He then urged the Dutch government to immediately build posts on the coast of Papua.

After obtaining approval from the Dutch kingdom, two ships led by Jan Jacob Steenboom departed from Ambon on April 21, 1828, in search of the right location to establish a defense post. In July 1828, Jan Jacob Steenboom finally determined the location, which was later named Triton Bay.

The crew of the ship brought by Jan Jacob Steenboom began to build several small buildings with pointed wooden fences.

On August 24, 1828, to coincide with the birthday of King Willem I, the Netherlands raised its flag and officially proclaimed that West Papua was its territory. A number of indigenous people also declared their loyalty and were appointed by the Dutch as regional heads.

See also  The Path of the Spirits Found, It is the Explanation of the Papuan Archaeological Center

While the simple outpost built by the crew of Jan Jacob Steenboom was later named Fort Du Bus Fort. The name was taken from the name of Leonard du Bus de Gisignies, the Governor General of the Dutch East Indies who was in power at that time.

Different from other Dutch forts, Fort Du Bus Fort did not stand for a long time. In 1835, the Dutch government ordered to dismantle the fort and leave the settlement. This was caused by the plague that attacked the Dutch settlers and attacks from the tribes in Seram and Goram.

In the following years, officers from the Dutch government only visited Triton Bay on a regular basis. As proof of its existence, a monument was later built by the government at the site of the Fort du Bus  fortress.

Government Accelerates an Infrastructure Development for Papua and West Papua, Here are the Details

Sirep or Tifa in the Tradition of Biak People

Hydroponic Plant Gardening, a Fun Way for Killing Time of PPKM in Jayapura

Noken Craftsmen at Manokwari Receive the Training of Spinning Tool

The potential of Miossu Island of Papua, a Habitat of Napoleon Fish up to Incredible Coral Reefs

PLN Assets in Papua Worth Rp.19 Billion Get Certified