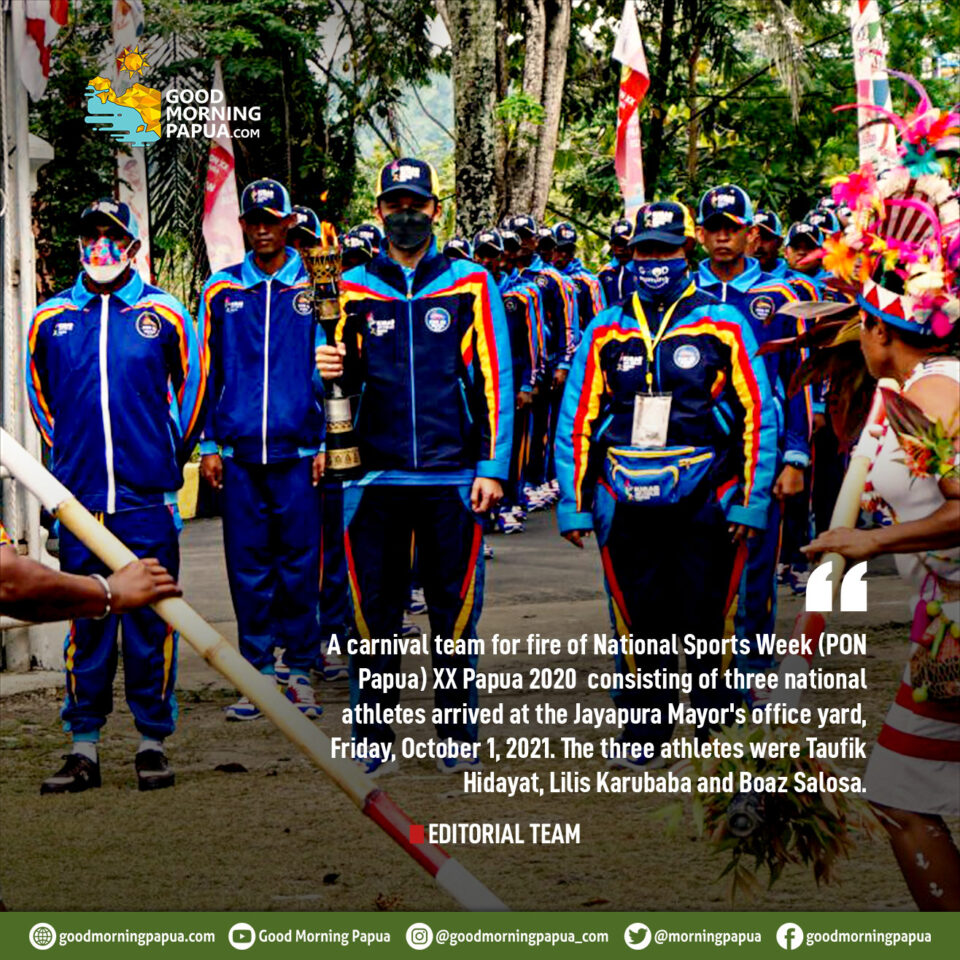 The fire carnival team were greeted by traditional dances, then the ceremony for the acceptance and release of the  fire carnival of PON XX Papua began with the Mayor of Jayapura Benhur Tommy Mano, who received the Papua PON fire from the 2004 Athens Olympic gold medal winner Taufik Hidayat.

“This is a history for Papua, especially Jayapura City, as the largest cluster in the PON XX Papua 2021, which consists of 16 sports, 16 venues and 22 disciplines,” said Benhur at the acceptance and release ceremony of the PON XX Papua fire parade.

Currently, according to Benhur, the best athletes from all provinces, from all corners of the country, have gathered. Every athlete gets ready to compete and is ready to become the champion of PON Papua. Benhur said that PON is a momentum to ignite the national movement for sports competitions, which must start from the village to the entire province.

“We all have to move so that we will get many seeds of national sportsmen, there will be a healthy competition culture in our society, will grow fighting spirit, will grow winning mentality in all fields,” said Benhur.

See also  Johannes Abraham Dimara, a Fighter for the Unification of West Irian into the Republic of Indonesia

The Papuan PON Fire Carnival, which is being held from 27 September to 2 October 2021, starts from the PLTMG (Gas Engine Power Plant) area, Klamono West Papua, which is one of the oil and gas fields, which has the oldest wells in Indonesia.

The pure flames from the nature had traveled by air across a distance of thousands of kilometers. The torches traveled around, starting from Biak, Timika, Wamena, Merauke, Jayapura Regency, and ending in Jayapura City.

“Starting from Sorong, arriving in Biak, Timika, Wamena, Merauke, until arriving in the city of Jayapura, crossing five traditional territories, the journey is long enough, but with a big mission,” said the Daily Chair of the National Sports Week Committee (PB PON) XX Papua, Yunus Wonda.

Benhur then handed over the fire of the PON XX Papua to the Sorong-born footballer, Boaz Solossa to release the PON torch-bearing parade troops through various iconic and monumental strategic points in the city of Jayapura. The fire parade will end at the Lukas Enembe Stadium, Jayapura Regency at the opening ceremony of the  PON  XX Papua, Saturday 2 October 2021.

Alfa Hikinda: What an Enjoying to Take a Sip the Aroma of Arabica on the Sides of PON Papua

A Number of Developments are Accomplished, Progress has been Realized in Papua

PON of Papua, a Momentum to Put Aside a Difference