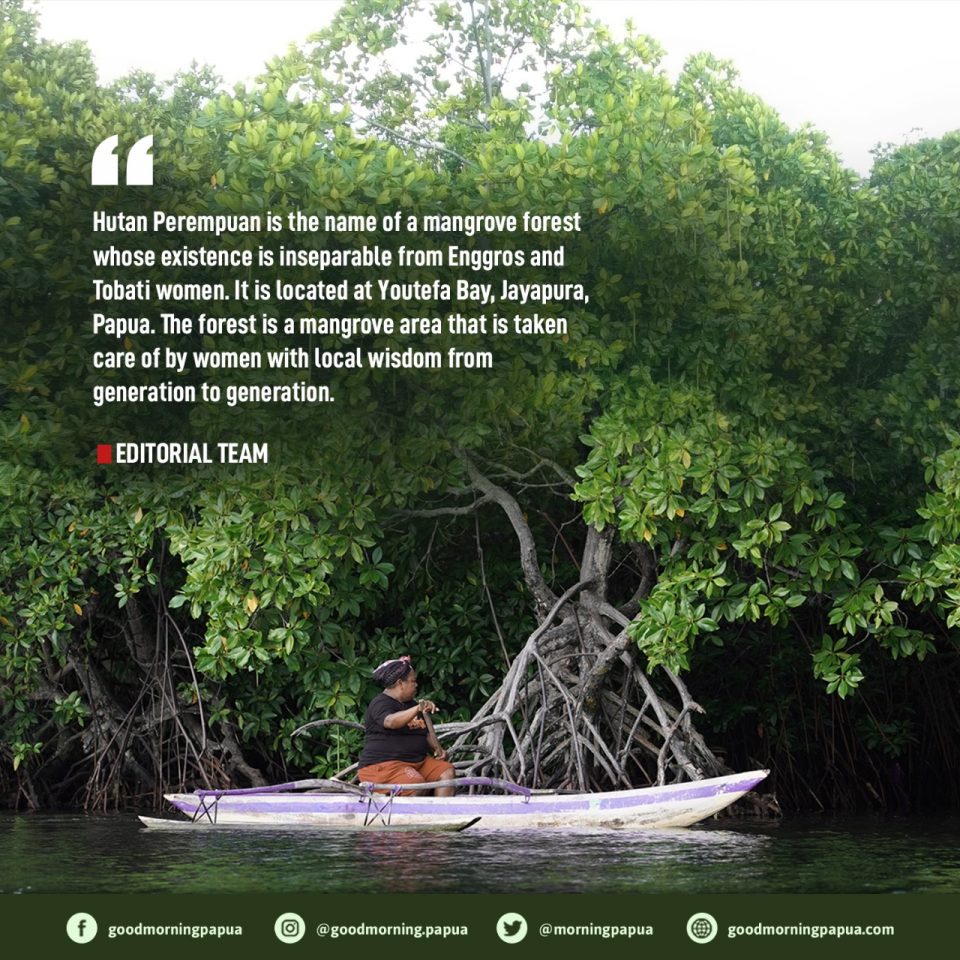 goodmorningpapua.com – The woman who is familiarly called Mama Ani immediately stopped her activity of looking for shells. Hurriedly she wore back her clothes she had taken off before looking for shells, or bia in Enggros language, at the mangroves.

“This forest is called Hutan Perempuan [because it is] specifically for women. No men can enter,” said Mama Ani,

Men who dare to come in to the forest as there are women in it must pay a fine of custom in the form of beads, an expensive valuable stuffs for the people of Enggros.

Hutan Perempuan is the name of a mangrove forest whose existence is inseparable from Enggros and Tobati women. It is located at Youtefa Bay, Jayapura,Papua.

The forest is a mangrove area that is taken care of by women with local wisdom from generation to generation.

“Women’s Forest has united to our customs, so we can’t relinquish that forest,” said Mama Ani softly.

Mama Ani is one of the few Enggros women who have preserved local wisdom in Hutan Perempuan, until now.

“Instead of staying like that, our culture must be arised. In the world there are no forest especially for women, only at Tobati-Enggros in which there are women’s forests, exclusively for women and looking for [shells] without clothes,” said Mama Ani.

“Mama is proud because there is no it in the world, only one in Tobati-Enggros.”

Mama Ani was born and raised at Tobati Village where is in the Youtefa Bay tourist park area.

After getting married, this 66 year old woman joined her husband to live in Enggros Village. This village is named by local people as Injros, meaning second place.

The village is a floating village, located in Youtefa Bay. To get there, you have to travel about 10 minutes by speedboat from Ciberi Beach.

Mama Ani shared her first experience with Women’s Forest. When he was a child, his mother often invited other women for looking for shells in the mangrove forest as the sea water was receding. The tradition of visiting mangrove forests, in the local language is called Tonotwiyat. Tonot means mangrove forest, while wiyat means invitation.

They then rowed a sampan into the mangrove forest, which is just a few minutes from their village.

In that quiet forest, women freely expressed their hearts to one another, recounting problems at hand or taking nostalgia for the past, while listening to the chirping of birds.

See also  The Charm of Dhinda Salsabila, a roller skate Athlete of Papua

“So if there is any kind of problem, ‘I’ll go to the women’s forest, we’ll tell you there,” said Mama Ani.

Arriving in the forest, they immediately take off their clothes before plunging themselves in and looking for shells amongst the mangrove roots.

The women chose to spend time together in the Women’s Forest because in the village, they felt that they do not have freedom of speech.

“In the big Para-Para, when there is a mass meeting, men and women are invited to the meeting. Men sit in the traditional parlors, women sit in the houses only.”

“So if session of dialogue is opened, only men to talk, women may not talk,” said Prisilla.

Para-para is a meeting place for men to discuss some issues of custom, land and sea, as well as to discuss political issues.

A Story of “Kopi Hari Bersama” in the Star Mountains

The Richness of Papuan Spices, Papuan Nutmeg can be Main Dishes and Desserts

Wonderful! Santa Claus in Papua Can Be a Covid-19 Vaccinator