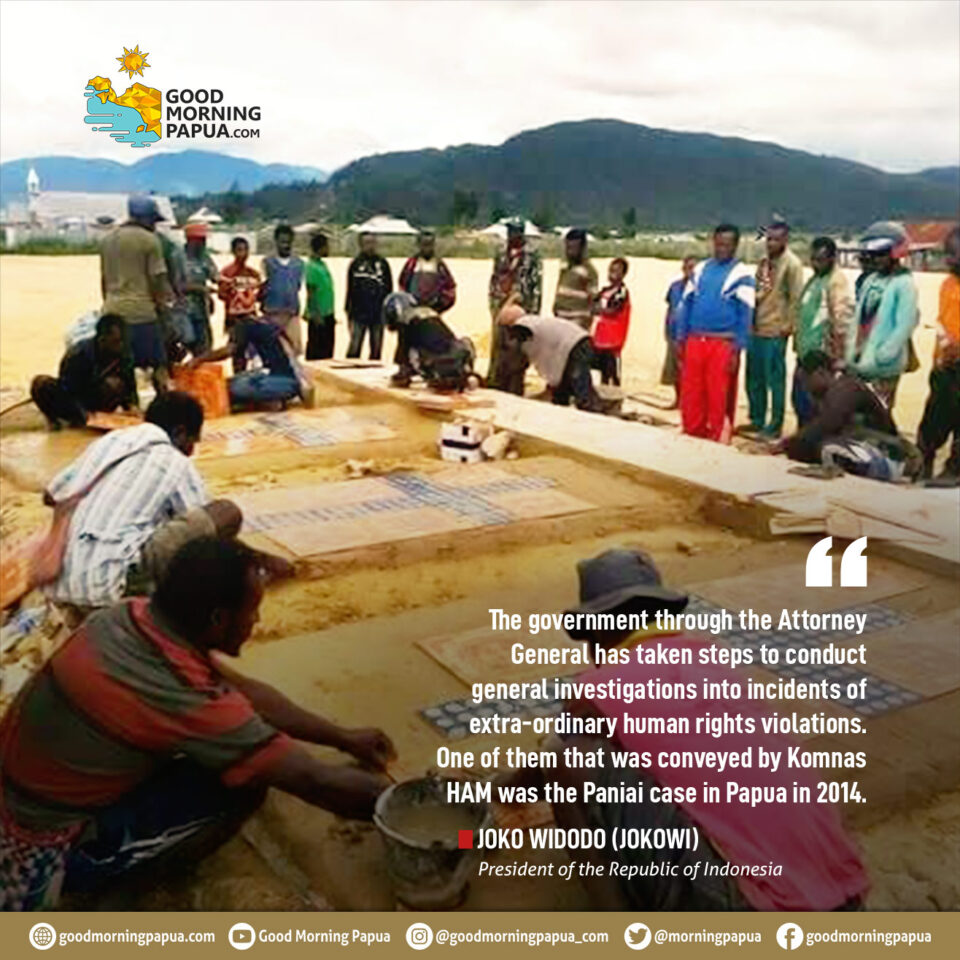 goodmorningpapua.com – In commemoration of International Human Rights Day, President Joko Widodo (Jokowi) emphasized that the government is committed to uphold and resolve extra-ordinary human rights violations, one of which is in Paniai Regency, Papua Province.

After the issuance of Law (UU) No. 26 of 2000 concerning the Human Rights Court, Jokowi has ordered the Attorney General to conduct a general investigation into cases of extra-ordinary human rights violations.

“The government through the Attorney General has taken steps to conduct general investigations into incidents of extra-ordinary human rights violations. One of them that was conveyed by Komnas HAM was the Paniai case in Papua in 2014,” said Jokowi when giving a speech at the Commemoration of International Human Rights Day at the State Palace, Jakarta Presidential Palace Complex, Friday (10/12/2021).

The investigation into serious human rights violations in Paniai Regency, said Jokowi, had started from collecting files from the Komnas HAM investigation, then the prosecutor’s office conducted a general investigation to ensure the principles of justice and legal certainty.

Another step that has been taken by the government for its commitment to uphold human rights violations, Jokowi revealed that in the middle of this year, the government had issued Presidential Regulation (Perpres) Number 53 of 2021 regarding the national human rights action plan for 2021-2024.

This action plan is intended to carry out the respect, protection, fulfillment, enforcement and promotion of human rights in Indonesia. The main targets are women’s groups, children from indigenous peoples, and people with disabilities.

“This Presidential Decree No. 53 is to uphold human rights not only to respect and protect civil and political rights, but also to include socio-economic rights, as well as cultural rights, especially targeting vulnerable groups whose rights we not only need to protect but also fulfill their rights”, said Jokowi.

The protection of vulnerable groups was proven by Jokowi by inaugurating the National Disability Committee for the first time last week. The existence of this committee demonstrates the government’s commitment to ensuring and monitoring the protection and fulfillment of disability rights.

“Once again, so that every citizen gets the same rights without feeling neglected and differentiated,” said Jokowi.

The former governor of DKI Jakarta said that the guarantee of civil, political and legal rights should also be a concern for the government and Komnas HAM. So that all citizens get the same protection without discriminating against ethnicity, religion, gender or race.

A Regent of Puncak: Residents Possesing NIK make them Easier to Receive Assistance

Papuan PON is a Barometer of Indonesian Sports