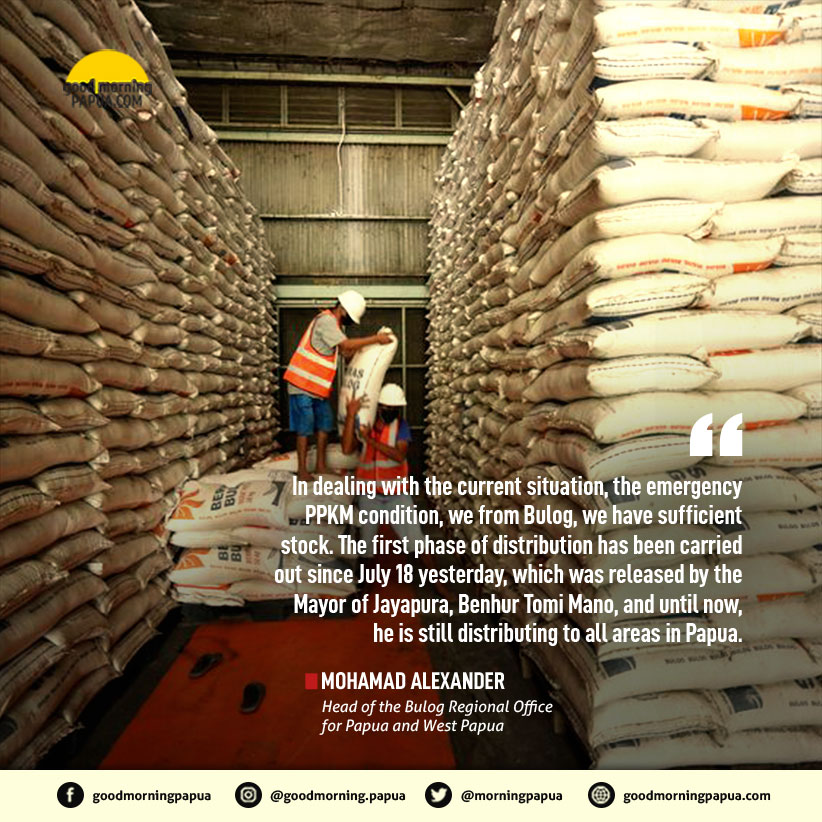 goodmorningpapua.com – A Public Company [Perum] of Bulog for Papua and West Papua Regional Office, ensures that rice stocks are safe ahead of the imposition of Level 4 Community Activity Restrictions (PPKM).

A Head of the Bulog Regional Office for Papua and West Papua, Mohamad Alexander, said the operational stock of Bulog for Papua, as of July 27, 2021, reached 17,455 tons, while West Papua reached 12,545 tons.

“We are from Bulog as a BUMN handling food logistics, especially rice, so that the availability of rice stocks is very sufficient. For our work area which oversees the Papua and West Papua regions, there are approximately 30 thousand tons, which is up to the next 5 months,” said Alexander, Tuesday 27 July 2021.

The needs of rice at Papua are also supported from Merauke as a food production center area that is still absorbing rice procurement. It is estimated that the absorption of Merauke farmers’ rice will continue from August to December.

In accordance with the direction of the Ministry of Social Affairs, Bulog also distributed rice from President Joko Widodo nationally reaching 20 million tons to Beneficiary Families (KPM). Meanwhile for West Papua it is 1,693 tons and Papua is approximately 1,500 tons.

“In dealing with the current situation, the emergency PPKM condition, we from Bulog, we have sufficient stock. The first phase of distribution has been carried out since July 18 yesterday, which was released by the Mayor of Jayapura, Benhur Tomi Mano, and until now, he is still distributing to all areas in Papua, “he explained.

Alexander said that the distribution of the first phase for the West Papua region had reached 63 percent, while Papua itself was still 14 percent. “Indeed, there are some areas whose geographical conditions are a bit difficult and there are security factors as well. Even so, we from Bulog are escorted from the BPKP by the Regional Police for smooth distribution,” said Alexander.

He added that Bulog is the provider of goods, while the leading sectors are the Social Service and the Ministry of Social Affairs. “We hope that there will be active cooperation from the Social Service. Moreover, there is an instruction from the Minister of Home Affairs, saying that all governors, regents and mayors help for the smooth distribution of this rice,” he added.

For the sake of the Spirit of Welfare, the Chairperson of the Lapago Regents Association will Hold a Discussion Forum Concerning the Division

Today Journalists in Jayapura Regency Have a Media Center

Papua 2022 UMP Has Been Assigned, Here’s the Figure

National Hero from Papua, Enshrined in Currency and Name of Warship