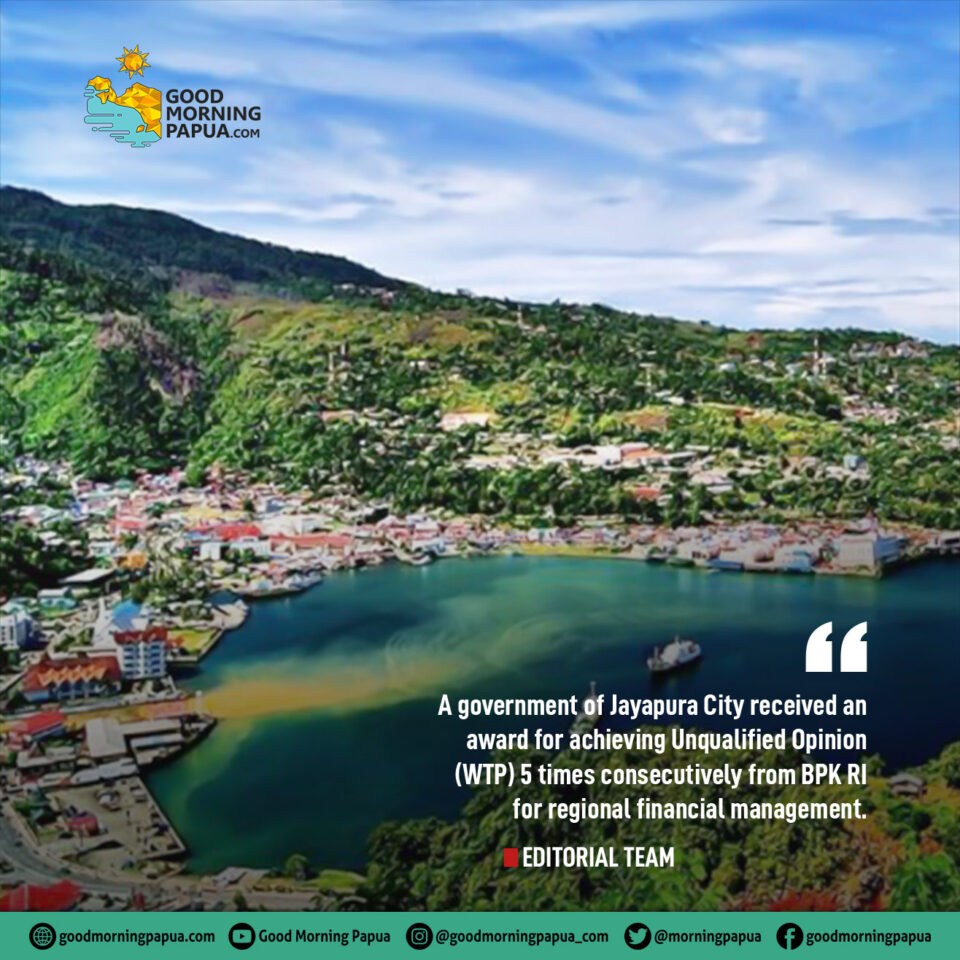 The award from the Minister of Finance of the Republic of Indonesia was handed over by the Governor of Papua Lukas Enembe to the Mayor of Jayapura Benhur Tomi Mano at the State Building, Jayapura City, Monday 18 October 2021.

In addition to WTP for LKPD, the Jayapura City Government also received an award for the Team for the Acceleration and Expansion of Regional Digitization (TP2DD) by the Coordinating Ministry for the Economy of the Republic of Indonesia and the Award for the Best Regency/City Regional Inflation Control Team (TPID) in 2021 for the Nusa Tenggara, Maluku and Papua regions.

A Major of Jayapura, Benhur Tomi Mano, conveyed that the WTP opinion from the BPK RI on the LKPD of Jayapura City was a result of the hard work of all Regional Apparatus Organizations. “This is the OPD’s hard work so that 5 times in a row it gets WTP, if the total has been 8 times,” said Tomi.

According to Tomi Mano, the success of defending the TPID champion was due to the one-price control movement program, also known as Pace. In addition, the Jayapura City Government also has a program towards the Great Jayapura City.

“This Great Program has four pillars that it focuses on, namely price affordability, supply availability, smooth distribution and effective communication (4K) as well as several commitments and we continue,” he said.

In addition to the Jayapura City Government program, continued BTM, as Tomi Mano is familiarly called, good coordination with the City Budget Team and BI has contributed  for maintaining the best TPID.

“Yesterday we got it directly from the Coordinating Minister for TPID, it is hard to maintain if there is no intense communication,” he said.

The Head of the Regional Office of the Directorate General of Treasury of the Papua Province, Burhani AS, said that the award from the Government through the Minister of Finance to the Regional Government who received WTP opinion on LKPD 5 times in a row was a form of appreciation.

“This is a form of appreciation for these achievements and receiving an award plaque. We hope that this award can motivate all local governments in managing state or regional finances to be increasingly better,” he said.

Burhani added, BPK’s opinion on LKPD is one of the main criteria in calculating the Regional Incentive Fund (DID). The achievement of opinions from the BPK does not necessarily get DID, but becomes a big capital in addition to the timely stipulation of Regional Budgets, the use of e-budgeting, and e-procurement as well as other requirements.

NU Collaborates with FKUB to Hold a Preaching about Nationality with Gus Muwafiq in Keerom, Papua