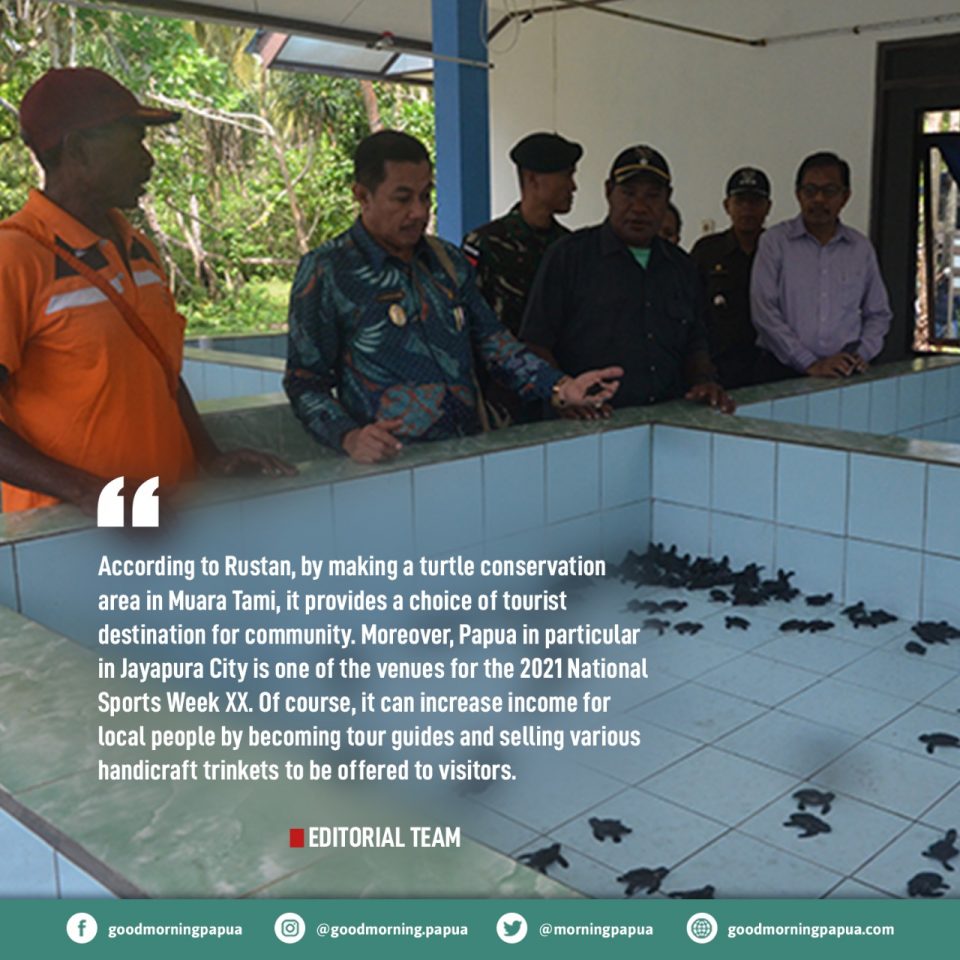 goodmorningpapua.com –  The Deputy Mayor of Jayapura, Rustan Saru, said that the turtle conservation area in Skouw Yambe, Muara Tami District, Jayapura City, Papua Province, has the potential to become a tourist destination if it is managed properly.

“The infrastructure arrangement in the turtle conservation area is very important so that many people come to visit,” said Rustan at the Jayapura Mayor’s Office, Monday (5/2021).

According to Rustan, by making a turtle conservation area in Muara Tami, it provides a choice of tourist destination for community. Moreover, Papua in particular in Jayapura City is one of the venues for the 2021 National Sports Week XX

“Of course, it can increase income for local people by becoming tour guides and selling various handicraft trinkets to be offered to visitors,” said Rustan.

Rustan hopes that the infrastructure arrangement at the turtle conservation site can involve the local community, because they better know and understand the facilities needed for the comfort and safety of the visiting residents.

The head of the Jayapura City Fisheries Service, Matheys Sibi, said that the turtle conservation area involves the local community by forming a captivity group.

“There is a group in Skouw Yambe. This group is our fostered group which has been running for 5 years,” said Sibi.

Sibi said, his party is currently carrying out infrastructure arrangements with a focus on improving of the facilities and infrastructure for the turtle conservation.

“We are still fixing the mother tub (raising hatchlings) before being released into the sea with a size of 1 × 1.5 meters. There are four tubs (for hatchlings), four main tubs measuring 1.5 × 2.5 meters,” said Sibi.

Sibi said, the people in Skouw Yambe looked serious and enthusiastic about breeding, by taking care of the eggs until they hatched, then releasing them into the sea.

“One turtle can lay eggs, the varying from 80 to 120 eggs. The eggs are taken by the community, then placed in a prepared container. Then, 53 days later after hatching they are released into the sea,” said Sibi.

An Exoticism of Wasur National Park

The Path of the Spirits Found, It is the Explanation of the Papuan Archaeological Center

PLN Assets in Papua Worth Rp.19 Billion Get Certified